The malayalam Film Industry has grown from small film industry to Top 5 revenue churning film industry in India. It was a gradual process since past few decades. Advent of Overseas markets has helped Growth of Malayalam cinema especially GCC. Here we are listing Highest Grossing Malayalam Movies of each year from 1980 to 1999. 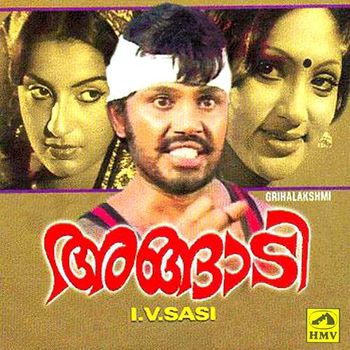 Angadi directed by MasterCraftsman IV Sasi starring Jayan & Sukumaran was a trendsetter in Mollywood. Movie went onto to complete 100+ days at KeralaBoxOffice. 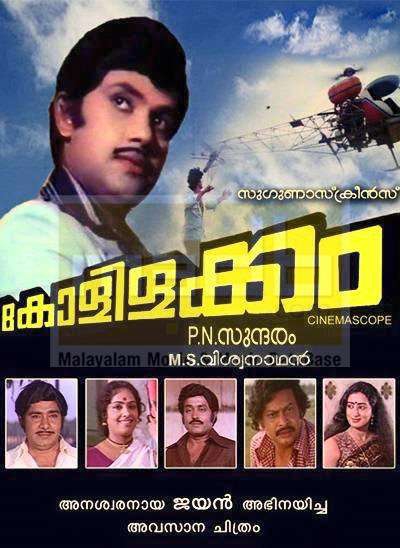 Kolilakkam directed by PN Sundaram starring Jayan was last movie in Superstar Jayan’s career. He died during climax shot when he was doing a risky fight scene in helicopter. Jayan who is known for not using any dupe for risky fights failed this time and died on the spot. Movie which Released after Superstar Jayan’s demise went onto become a record breaking movie thrashing all existing records. 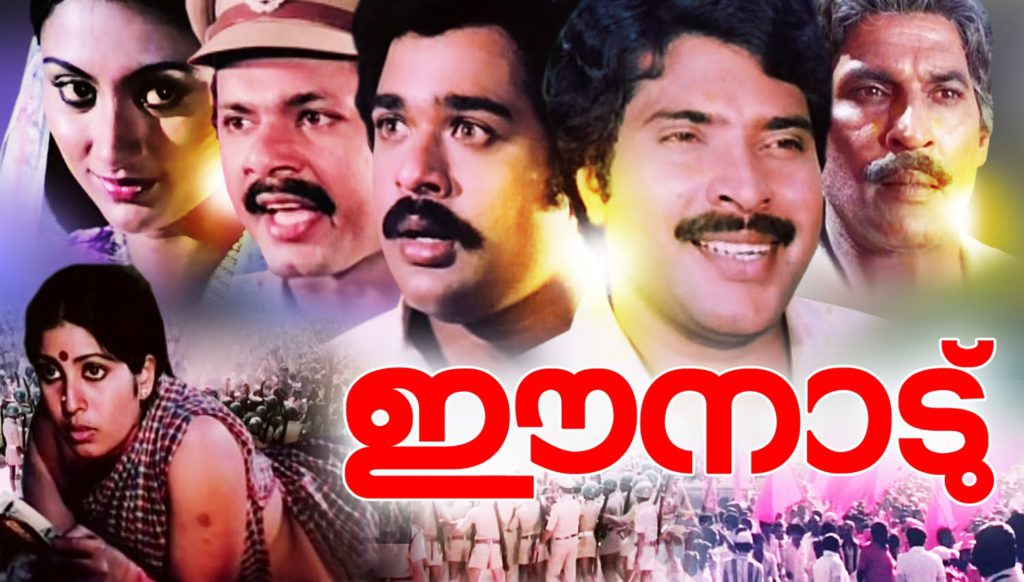 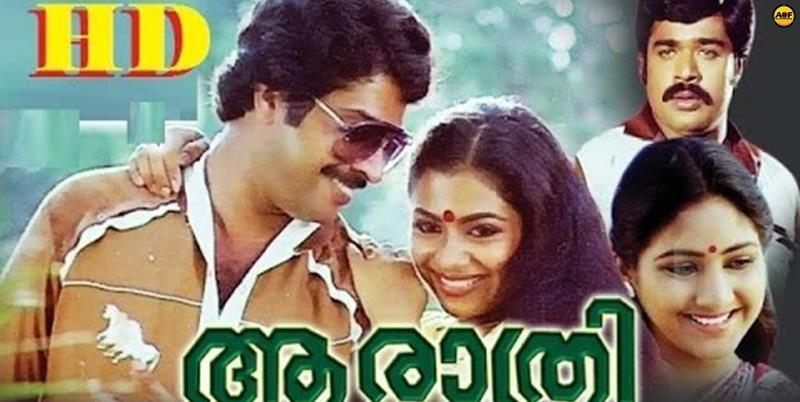 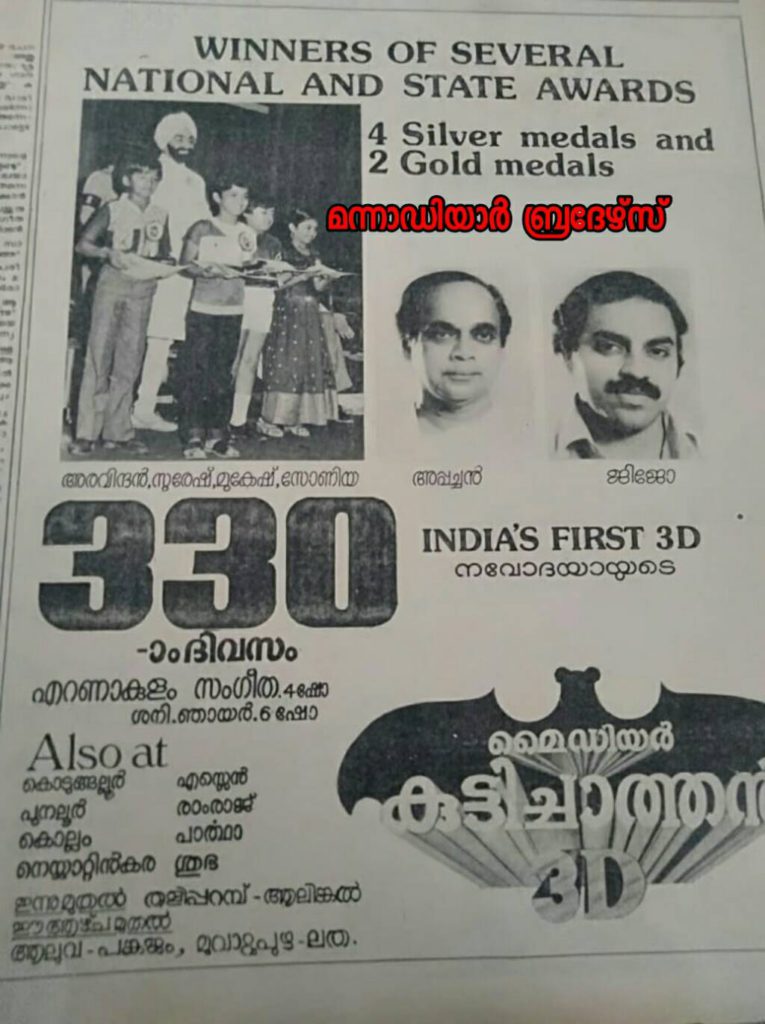 My Dear Kuttichaathan directed by Jijo Punnoose was first 3D movie in India. Movie made on budget of 35 lakhs went onto gross 1.5 Crores at Worldwide Theatricals. It’s re-edited version released on 1997 and collected 1.3 Crores, hence grossing 2.8 Crores from Both Releases(1984 Release & 1997 Release). 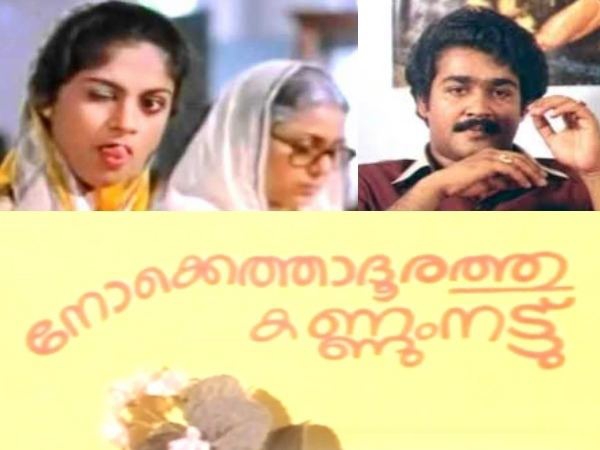 Movie directed by Fazil starring Mohanlal was stepping stone for Mohanlal as a huge star in Mollywood. Movie was remade to Tamil & Telugu. 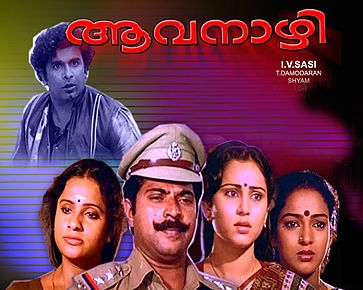 Aavanaazhi directed by IV Sasi starring Mammootty was a police movie made on budget of 21 lakhs. Movie has been a huge commercial hit at BoxOffice. Movie grossed 1.8 Crores gross from Theatricals. Only Industrial hit among police genre in Mollywood till date. 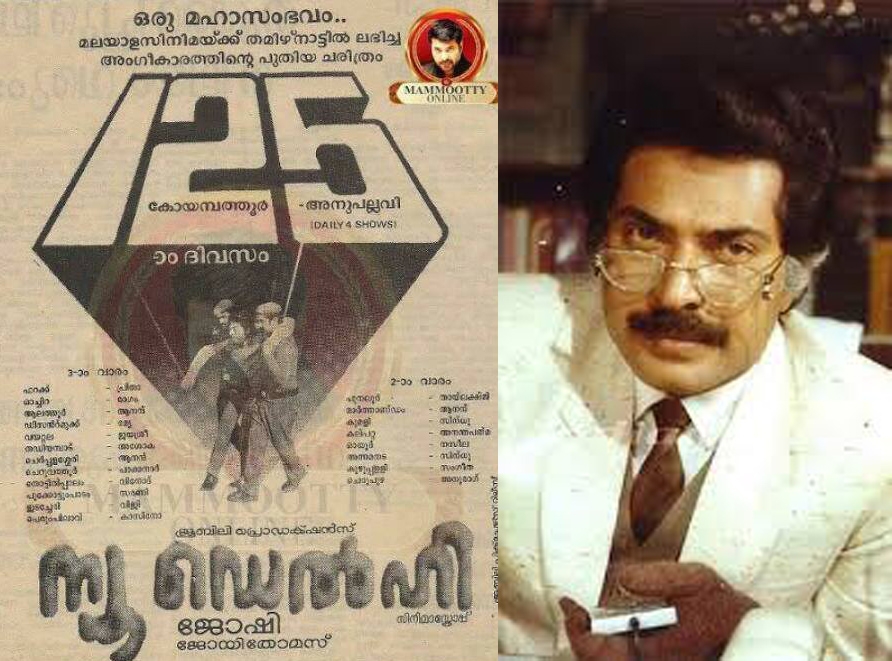 Mammootty was going through a rough patch after industrial hit Aavanaazhi. He was going through a string of flops and most of film pundits predicted his end as a star. Dennis joseph wrote a brilliant script which was directed by Joshi. Movie made Earth Shattering Opening and went onto become huge hit for Megastar Mammootty. A Strong comeback by Mammootty. Movie become first Malayalam movie to gross 2 Crores from Theatricals. 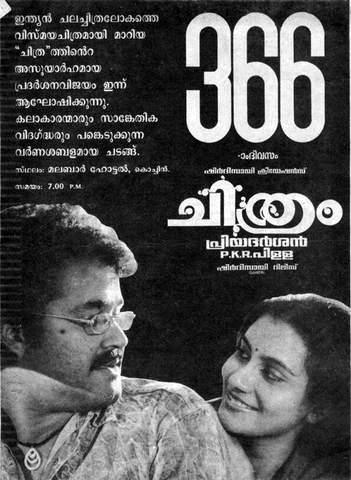 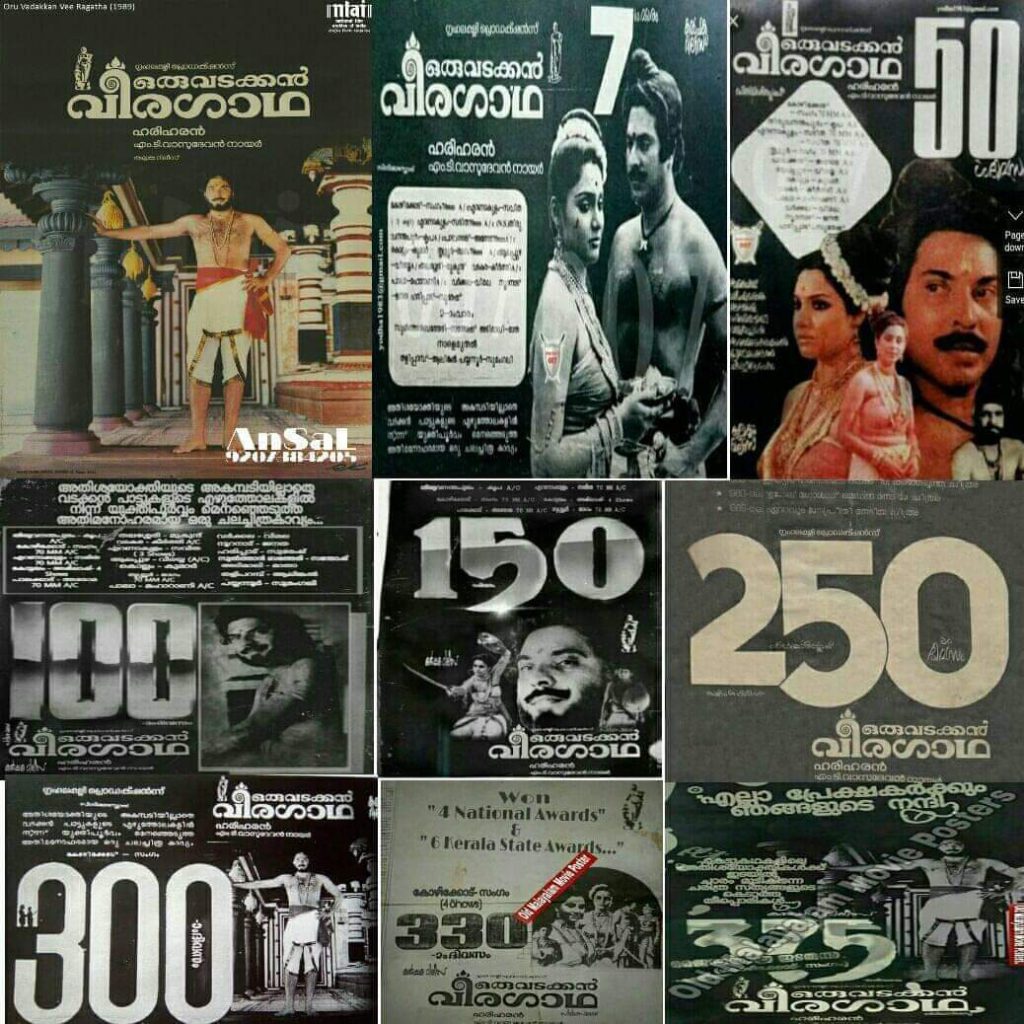 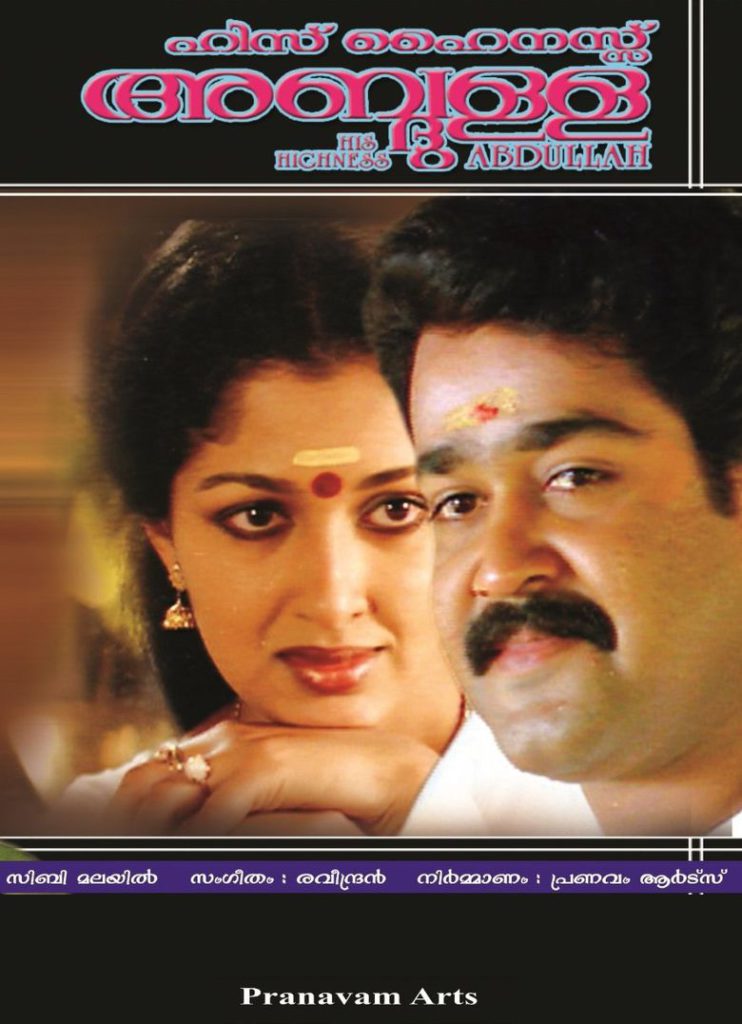 Movie directed by Sibi Malayil starring Mohanlal is famous for its songs. Movie bankrolled by Pranavam arts went onto become highest grossing movie of the year. 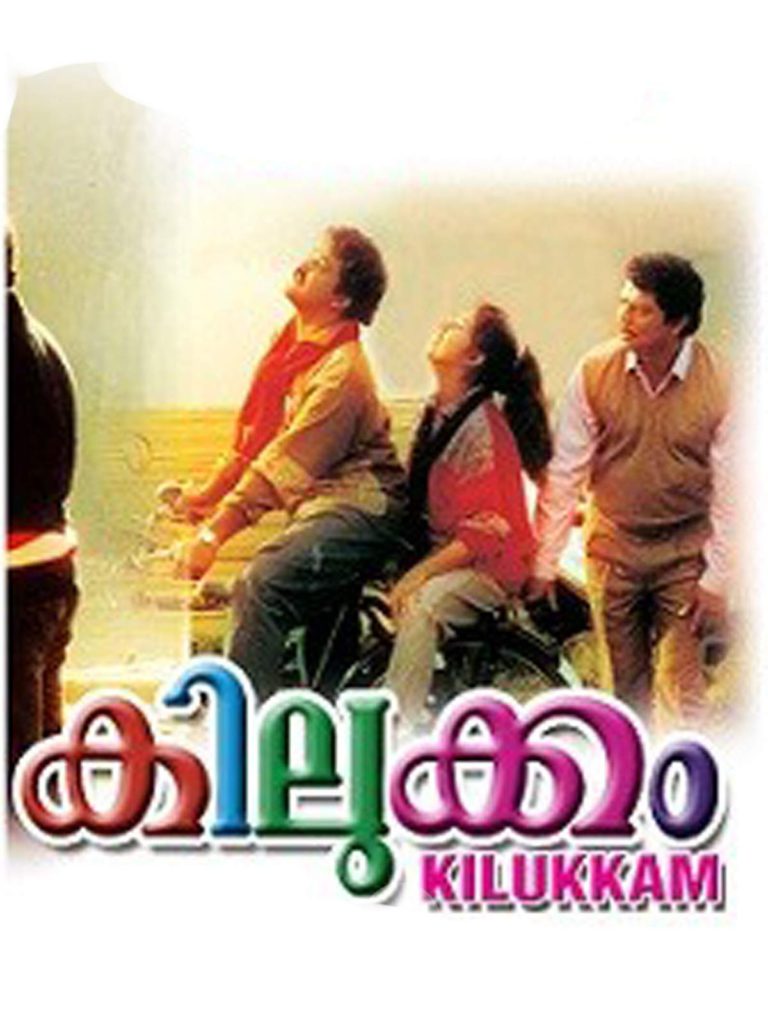 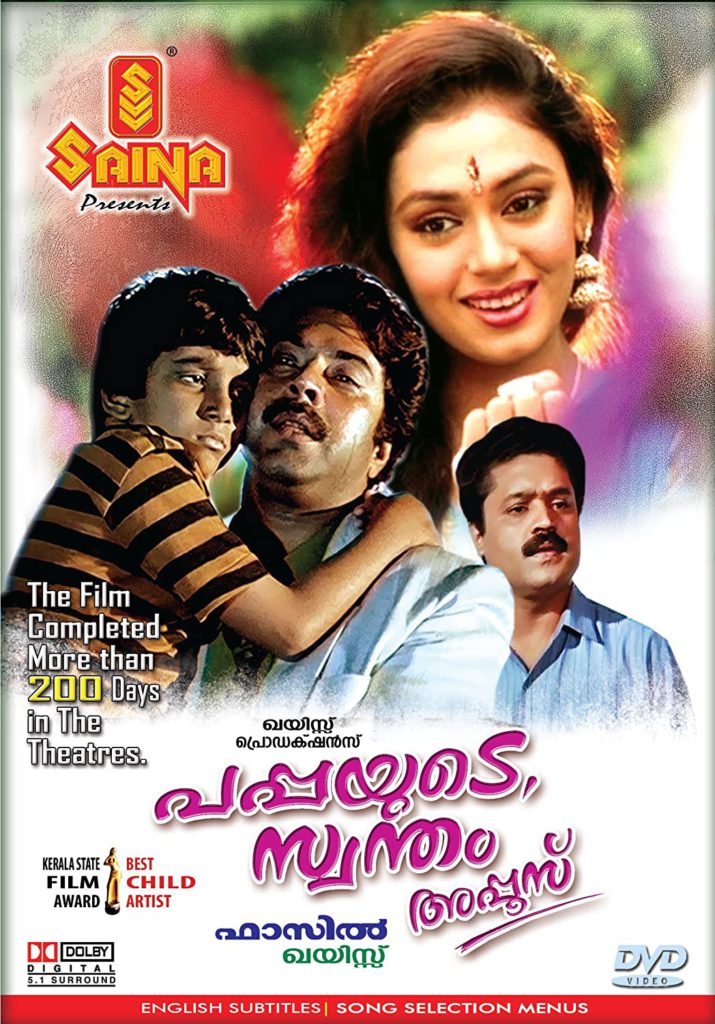 Movie directed by Fazil starring Mammootty portrays father-son love. A father who can go to any end to save his son’s life. Movie is well known for its emotional scenes. Movie started slowly but ended up as a Huge Commercial Hit at BoxOffice. 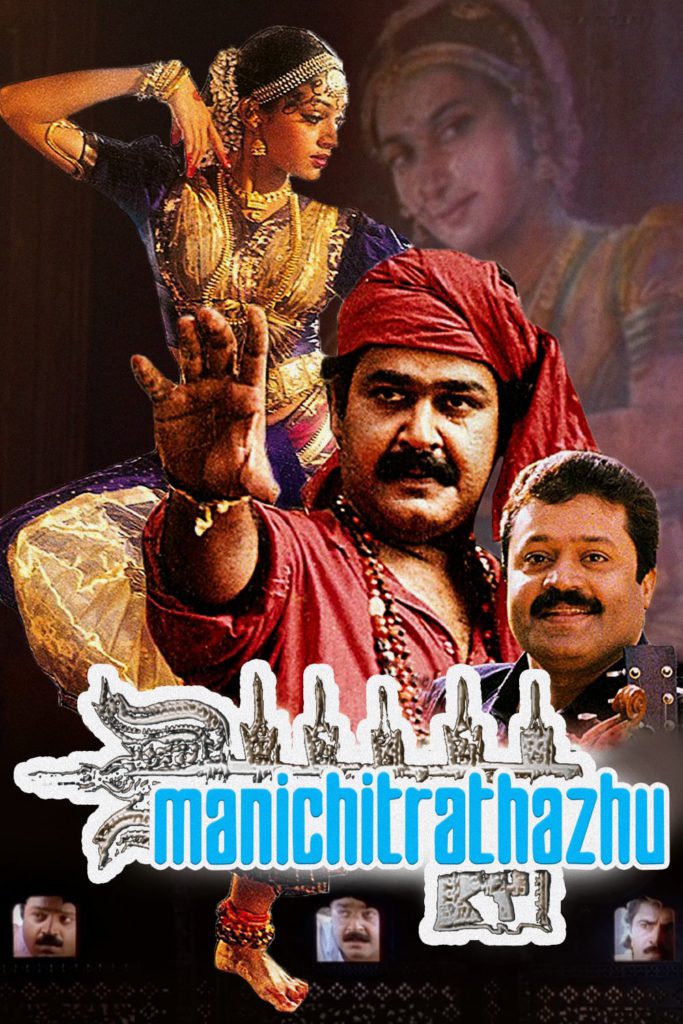 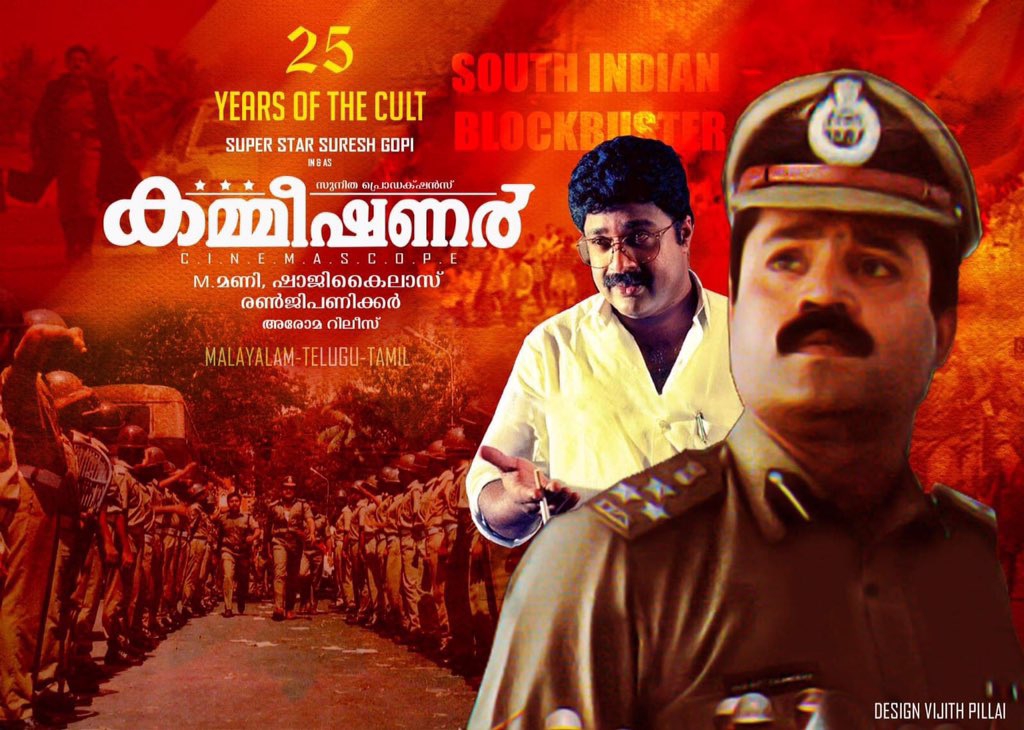 Commissioner directed by Shaji Kailas starring Suresh Gopi made an Earth Shattering Opening. Movie is considered to be one of the best Police movie in Malayalam. Movie grossed 5 Crores from Worldwide Theatricals. 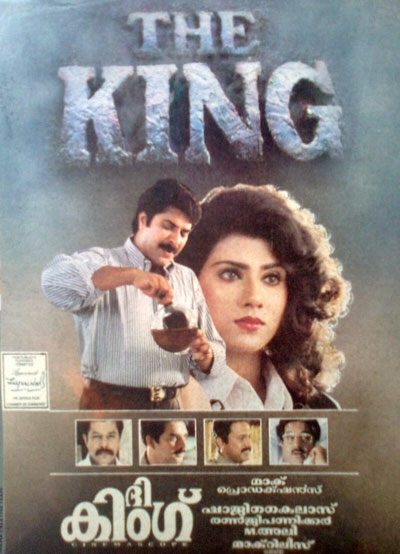 The King directed by Shaji Kailas is another biggest hit in Mollywood. Dialogues of this movie were released as audio cassettes then and was trendsetter in Kerala. Movie surpassed final gross of Spadikam to become highest grossing movie of the year. Movie became first Malayalam movie to gross 10 Crores from Worldwide Theatricals. Movie grossed 12 Crores(including dubbed versions) from its final run. 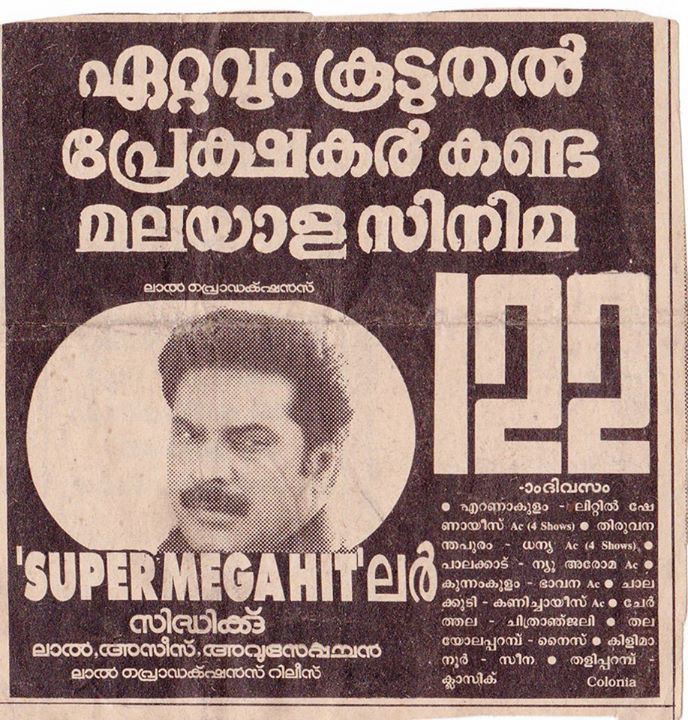 Hitler directed by Siddique starring Mammootty is Comedy Entertainer. Story lies around a Brother and how he cares his sisters. A caring but strict brother. Movie completed 100 days in 13 A class theatres and is first time a movie did so. Movie became first Malayalam movie to cross 15 Crores gross from Theatricals. 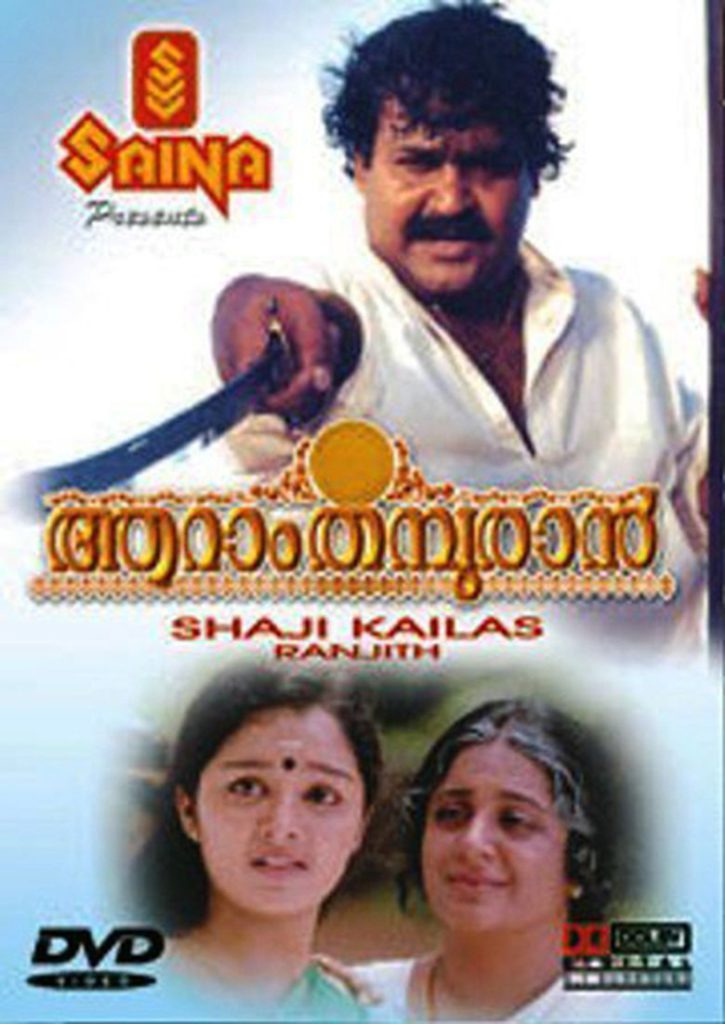 AaraamThampuran directed by Shaji Kailas starring Mohanlal & Manju Warrier is an Action movie which made Earth Shattering opening at BoxOffice. It surpassed Final Gross of Industrial hit movie AniyathiPraavu. Songs were Chartbusters and movie was a trendsetter. Movie grossed 16 Crores from its final run. 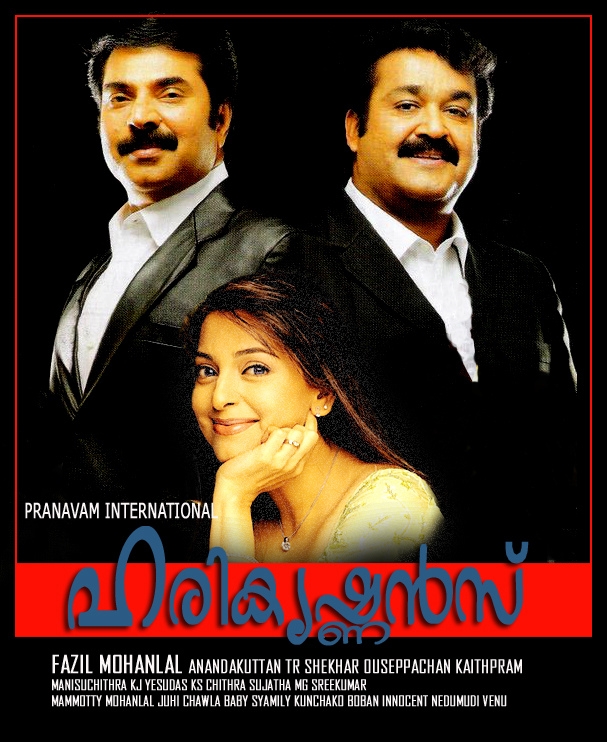 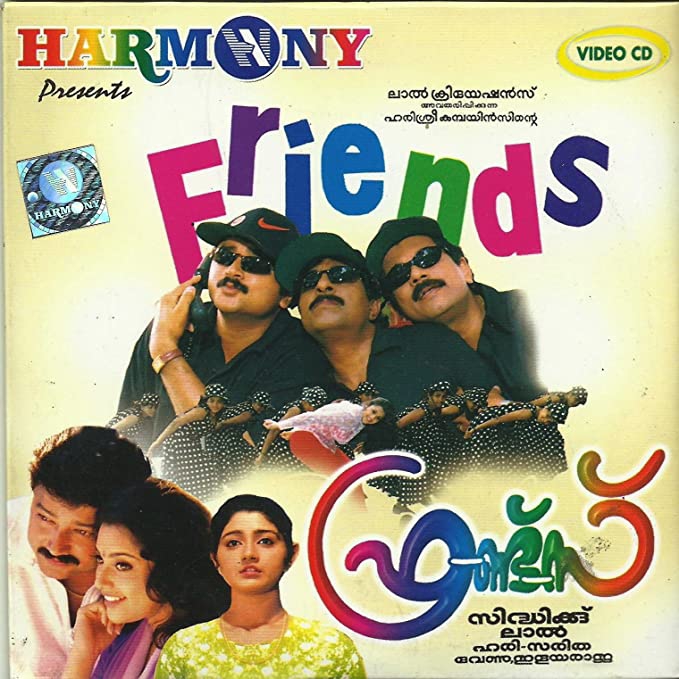