The decade begins with a bang as Kunchakko Boban starrer ,Anjaam Paathira sets a new benchmark for Malayalam thrillers, especially serial killer movies. Director Midhun Manuel who was famous till now for light hearted movies like Aadu franchise , Ann Maria Kalippilaanu and Ohm Shanthi Oshaana (screenplay alone) takes a pathbreaking detour into thriller territory. He really needs to be applauded for the tightly knitted screenplay and direction which showcases real craft. Casting also deserves special mention. Complemented by ample contributions from the cast and crew, he really delivers punches at all the right moments and makes it thrilling as well as gripping with the sleight of hand dexterity of a conjurer .The movie which did not come with a baggage of too many expectations when it hit the theaters  , rises above existing conventions, formulaic templates and thriller clichés. It also succeeds at hitting a socially relevant chord connected with contemporary events while touching upon an unholy alliance between law enforcers and the member of a monastic order. 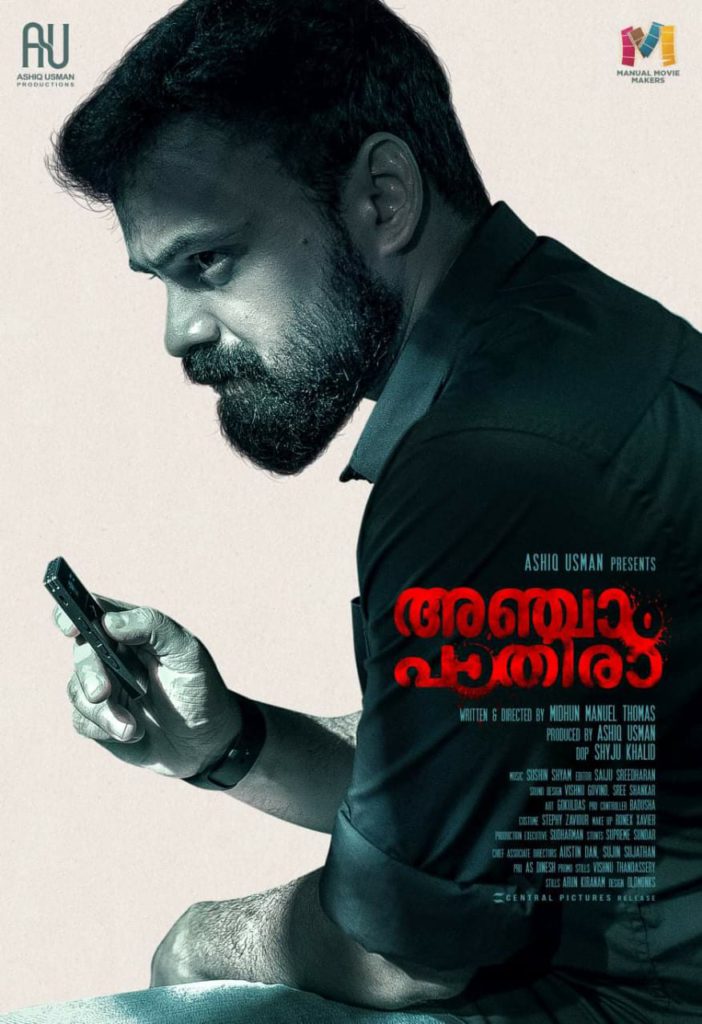 The cinematography(Shyju Khalid) and pulsating BGM (Sushin Shyam)  adds to elevating the mood and feel of the movie as a dark thriller .In fact ,the visual frames take the city to an almost ethereal level . Writer Sajin Srijith of Indian Express sums it in a nutshell when he notes that Shyju Khalid shoots Kochi like Michael Mann shoots L.A. Another viewer of the movie settled in urban Kochi  ,even goes on to  wonder if it is visually the same place where he has been staying in real life, for 5 years. That alone is truly a cinematic/artistic achievement. At the same time, it is not at all hard to believe that the setting is Kerala, as the story unfolds.

Role of the main sleuth assisting the police force, a consultant psychologist  as well as budding criminologist ,is like one which was  tailor-made for Kunchakko Boban. Movie wastes no time as it sets the psychological tone of the movie in the opening sequence and pays homage to the  Mindhunter series, when he  interviews an  imprisoned serial killer as a case study of psychological profiling, for  solving crimes. This is followed by the brilliantly shot , dimly lit prophecy scene from the trailer. Next sequence involves a customary trope rather than cliché-the serial killers intro.

A cop takes a stroll in a deserted street after a game of cards .A sudden black out occurs as the power goes off in the street. The next day he is found brutally murdered, with heart and eyes plucked out and yet, no other signs of struggle. Only clue the killer intentionally leaves behind is a sculpture of Lady Justice. Everything else is pitch perfect. There are no loopholes and the formidable yet unknown cop killer continues to remain atleast one step ahead of the investigators, as he goes into a seemingly random killing spree. On paper it might seem a bit like Tamil thriller Ratsasan  as there is even a senior lady cop but trust me, this thriller will be like nothing you’v seen before. Revealing even a bit more will spoil the experience as the movie is packed with surprises and intricacies.

Few Malayalam thrillers know how and where exactly to end ,without spoonfeeding. The movie succeeds incredibly at doing that too. The impact was reinforced in the fully packed theater by the claps of a houseful audience, as soon as credits start rolling. It was truly a collective verdict and moment of resonance for the viewer in me. An emotion similar to what certain Korean thrillers can trigger, lingered even after leaving the theatre-one reason why I personally enjoyed the movie even more than Memories (2013) and Ratsasan.  Anjaam Pathira is definitely a must-watch movie, especially for thriller fans.