Who trilogy, Memento and the Three Act Structure: a deconstruction

There is something Agatha Christie says in her novel The mirror crack’d from side to side, “Murder is like a jigsaw. Until you fit in the final piece,you can’t see the whole picture”.

According to the “ Three-Act-Structure”  which was introduced as a fundamental writing paradigm by Hollywood’s ultimate script guru ,the late Syd Field, every good movie script is considered to have three common features- buildup, conflict and resolution.

Like that, there is also yet another term,  paradigm shift associated with any fundamental and revolutionary change in science as well as art. Now and then some visionary filmmaker succeeds at making it happen in the film field too, although such breakthroughs can also take time to settle and become established, as in case of any genuine revolution. Quoting filmmaker and writer Jonathan Paul’s writeup   ‘Bending the Rules of the Three Act Structure’   , “Quentin Tarantino has built a career by rearranging the three-act structure_. Pulp Fiction_ has the 3 parts – buildup, conflict and resolution, but not necessarily in that order. Christopher Nolan never found a story which he couldn’t make more complex than his own movies. Take Memento, for example. To call the film’s narrative path unconventional is an understatement.”

Now, in that same mould, there is chapter 2 of in fact a trilogy. The neo-noir sci-fi psychological Indian thriller Who (2018) which deconstructs and rearranges the traditional three act structure as a result of the daring vision and craft of a highly imaginative and skilled filmmaker from Kerala- Ajay Devaloka .Being an experienced editor as well ,he also got the freedom to edit his own movie. The visual as well as acoustic brilliance of the movie alone is commendable. Cinephiles who viewed it in the theatre itself last year were fortunate enough to fully experience the technical brilliance of the movie. 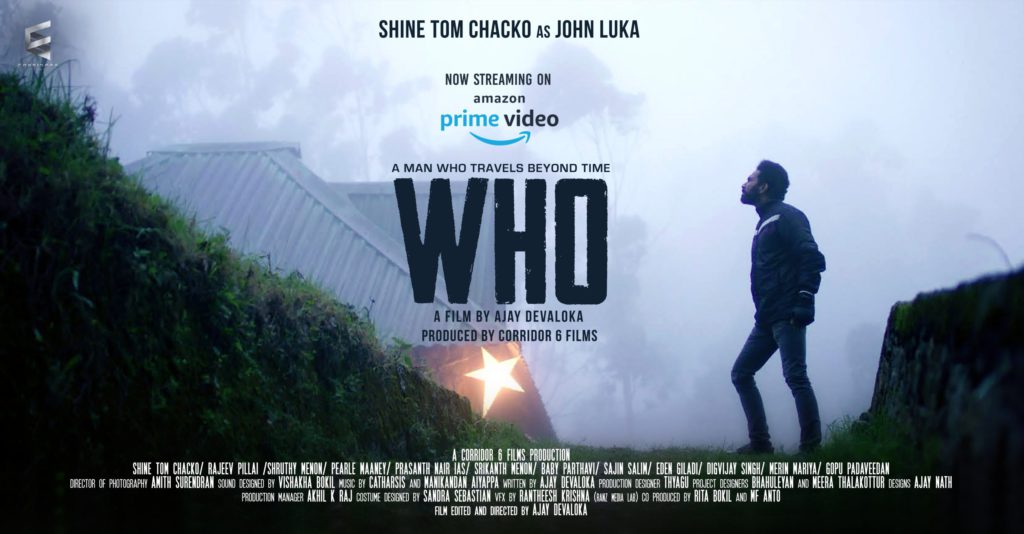 There is a relevant reason for the unconventional narrative of this movie -one which unfolds at various points as shared and nested dreams (as in Christopher Nolan’s Inception ). People who have watched Who as well as Memento and attempted to decode both movies will fully understand the connections. The stories are completely independent but both movies are centered around a murder mystery, at one point. Now that Who is out in Amazon Prime (with subtitles as well), fans of the movie also have the luxury to keep revisiting it. However it is also important to note that the director himself had originally conceived the movie expecting viewers to come up with their own interpretations. We need to look no further than David Lynch’s masterpiece in surrealism which harnessed the potential of dreams ,to appreciate the relevance of ambiguity in _Who _itself. But then ,why has Chapter 2 of a trilogy come out before its prequel and sequel , we can ask. Perhaps atleast part of the answer to that question is also  interlinked with  the non-linear structure of Mementos script itself.

Quoting Wikipedia, Memento is presented as two different sequences of scenes interspersed during the film: a series in black-and-white shown chronologically, and a series of color sequences shown in reverse order (simulating within the viewer’s perspective the same mental state as that of the protagonist who suffers from short term memory loss). The two sequences meet at the end of the film producing one complete and cohesive narrative. “ Refer the following illustration to get a better glimpse. 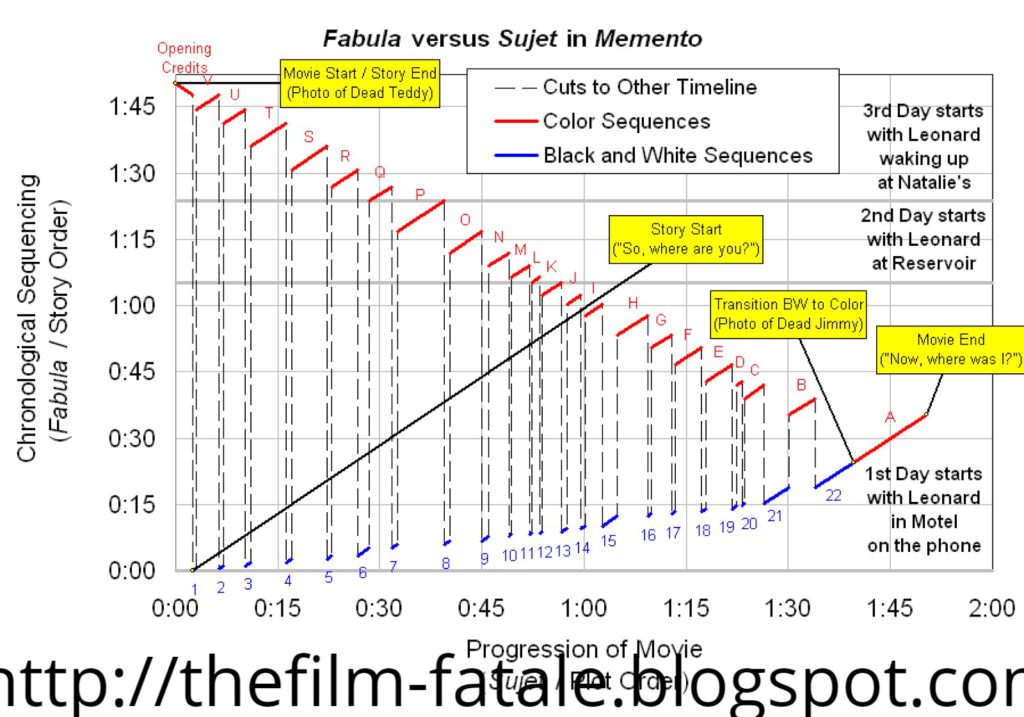 In fact there are many such Neo noir films where the filmmaker actively withholds information for better emotional connection. Who trilogy itself covers a time span of 300 years (2040 to 1760 AD ) in the imaginary world of Mercada (in time travel mode).So that’s once again potential for a rewind mode ,as in Memento, or maybe what if  Who itself is like a middle ground where the prequel and sequel will converge and sync fully in hindsight when we watch those movies ( Isabella and Galileo) as well , in the future. There is so much for the thinking viewer to contemplate and speculate. 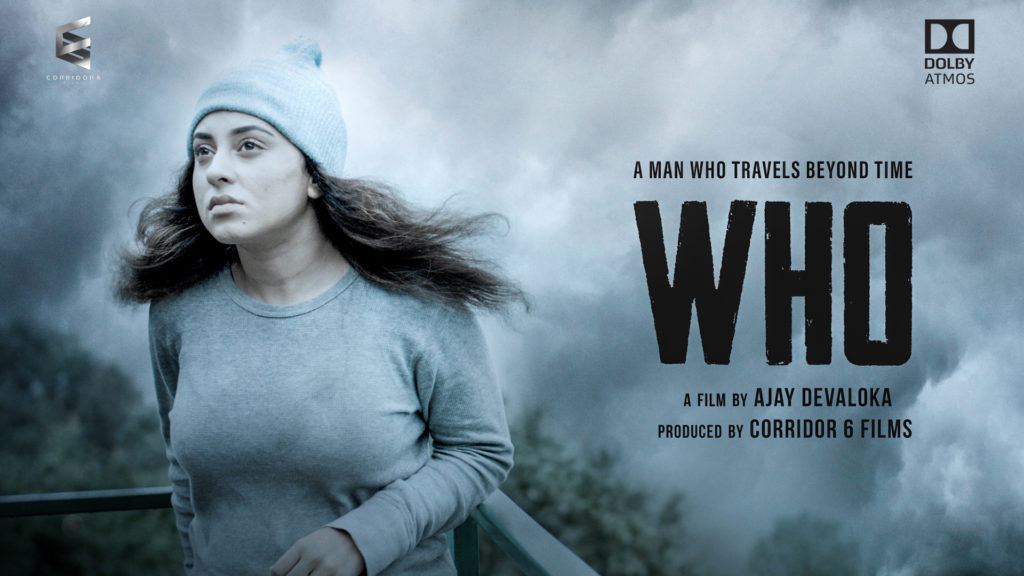 If Memento intended to fit us in the protagonist’s shoes, Who trilogy probably intends to take us for a ride across perspectives and time itself .After all ,the movie starts with the following quote of Einstein, “The Distinction between past,present and future is only a stubbornly persistent illusion.

Now forget the linear 3 act structure as well as a traditional viewing perspective and try this out, atleast the second time you watch the movie:

1.Visualize a Rubik’s cube and replace 6 faces with 5W’s and an additional ‘What If’.

2.Let the first 5 faces accommodate the 5W’s, ‘Who’ ,’Why’,’When’,’Where’, ’What’ and ’What If’ occupy the 6th ,since the movie is open to multiple interpretations and can branch at various points into  a slightly different artistic experience for each person. 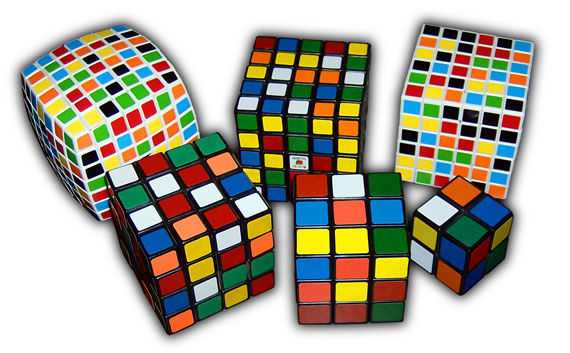 3.Make your own mind map or infographics to visually map all the time lines and keep contemplating possibilities -the 5W’s who ,why,when,where and what, the same way you flip a Rubik’s Cube.

4.Leave room for the prequel and sequel after seeing the movie from the perspective of every character…Presto.  It will be more than just one heck of a roller coaster ride.

Some movies are meant to not only entertain and spoon-feed but also instruct, enlighten, inspire and even magically trigger our own creativity. Malayalam film industry, Indian cinema and World cinema itself really deserves more of such movies.We as viewers just need to be a bit more broad minded and proactive.